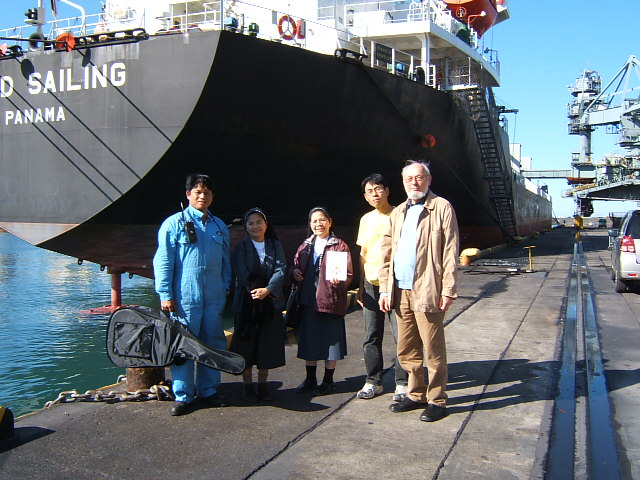 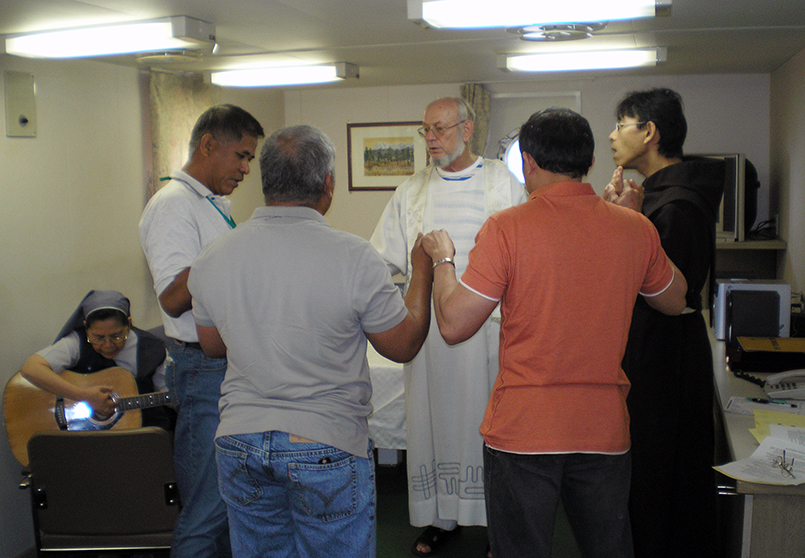 The friendly face of Fr Hubert Nelskamp OFM at the top of a ship’s gangway has been a welcome sight for seafarers arriving at the ports of Naoetsu and Kushiro in Japan for the past 50 years.

Fr Hubert, 80, is retiring this month after spending almost a third of his lifetime supporting seafarers’ pastoral and practical needs.

“After much deliberation and prayer, I have decided, for reasons of age and health, to return to Germany,” said Fr Hubert who will be based at the Franciscan monastery in Dorsten.

“After 50 years in the ministry in Japan, saying farewell is not easy,” he adds.

As port chaplain of Apostleship of the Sea (AoS), Fr Hubert has brought many seafarers to Mass whilst they were in port.

“When they have time to spend in port, they like to come to the church to pray and relax,”says Fr Hubert, who also celebrates Mass on board ships.

He particularly remembers celebrating a Mass during which the ship’s captain, an Egyptian man, said to him, “We have just passed through a typhoon and feared we would go down. We’d like to thank God that we are still alive.”

Such encounters have strengthened Fr Hubert’s believe that seafarers need all the support they can get when they come into port, especially after spending weeks at sea, vulnerable to the weather and work conditions on board.

After 50 years as AoS port chaplain Fr Hubert feels the need for chaplaincy in support of all seafarers, regardless of their religious beliefs, is now greater than ever, especially since the September 11 terror attacks in New York.”

“Before the incident, I was able to enter the port and meet seafarers on their ships at any time but it is more challenging now as I have to get clearance every time I visit a ship, which I gladly do, especially as there is no seafarers’ centre in Naoetsu port for crew to go to.”

In 2011, Fr Hubert was instrumental in setting up a fund to support Japanese fishermen affected by the earthquake and tsunami.

He also fondly remembers the many occasions when he distributed presents to seafarers, particularly over Christmas and New Year. These were normally woolly hats and other items, knitted by a team of dedicated volunteers.

“I have met many seafarers during my time as port chaplain, and am very thankful for everything that they bring to us from different countries on the long journey by sea, from food and household products to fuel and clothes.”