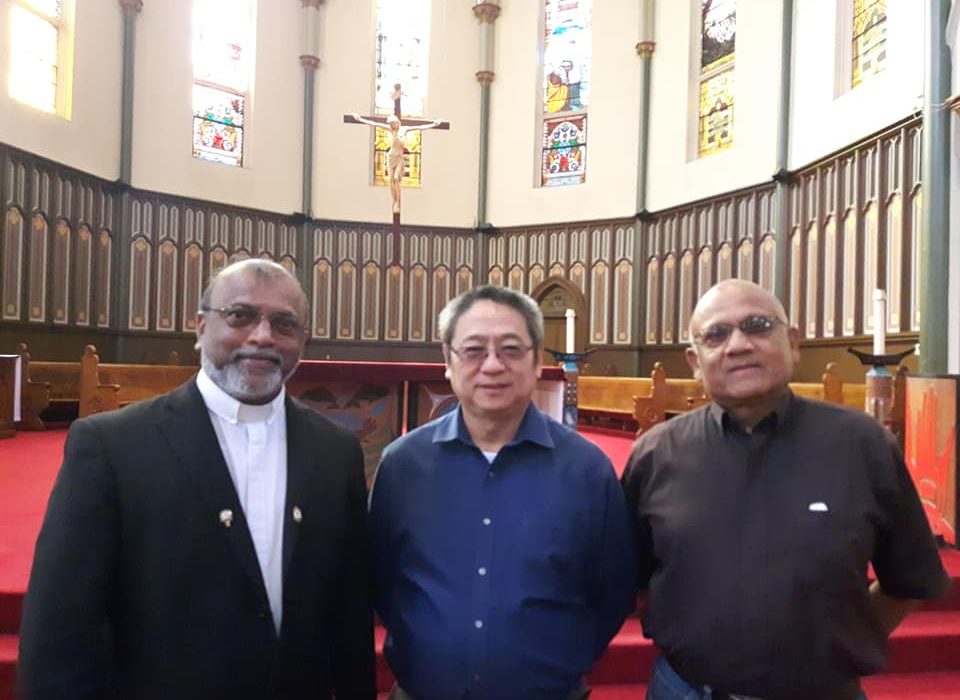 Bishop of Victoria Gary Gordon has appointed a new Port Chaplain to minister to seafarers arriving at the Port of Victoria, British Columbia.

Deacon Philip Yuson (pictured in the middle) joins the Apostleship of the Sea (AoS) network in British Columbia Canada. His appointment is indicative of the importance Bishop Gordon has attached to serving the needs of seafarers in Greater Victoria as well as the other small ports on Vancouver Island.

Deacon Philip is faced with the wonderful opportunity of establishing an AoS presence for the first time in the diocese. As part of his initiation, he looks forward to working closely with AoS West Coast Coordinator and Vancouver Port Chaplain Deacon Dileep Athaide and shadowing him on ship visits in the latter’s home port of Vancouver.

Deacon Athaide said, “Over the past couple of years, I have spoken with Bishop Gordon as well as several priests in his diocese regarding the need to provide a Catholic Chaplaincy to serve seafarers on ships that berth at their ports and also frequently anchor for extended periods of time in the waters nearby.”

He added, “Deacon Philip’s appointment will further galvanise our ministry of reaching out to people who work at sea.”

Fr Andrew said, “To explore the kind of ministry to seafarers, Bishop Gordon took it upon himself to go on board the ship to say Mass. From his time on board Bishop Gordon learnt about the lives of seafarers and some of the conditions they might sometimes face including loneliness, non-payment of wages, poor working conditions, stress and fatigue.

He added, “Bishop Gordon came to the conclusion that the presence of a Chaplain at the ports in the diocese was vital – someone who would be a shepherd to seafarers and provide spiritual care. Hence the appointment of Deacon Philip.”